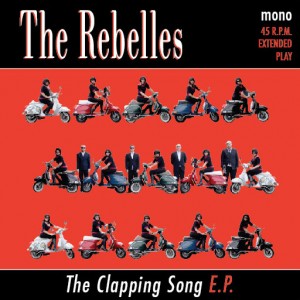 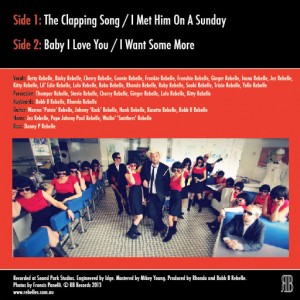 The world’s biggest girl group, The Rebelles, are excited to announce their very first vinyl release: The Clapping Song EP! Four souped-up songs, recorded at Melbourne’s Sound Park Studios and mastered by the legendary Mikey Young, that capture the energy and excitement of this unique band on one sensational piece of red wax.

But what’s an EP without a launch? It’s safe to say The Rebelles have a bit of wind in their sails at the moment after their recent barnstorming White Night set on the steps of Melbourne’s iconic Flinders Street Station. Rest assured they can’t wait to serve up another real, live wall of sound when they launch the EP over two huge Thursdays at the Cherry Bar’s famous Soul in the Basement, on 11 and 18 April. Soul in the Basement is the world’s longest running weekly soul night, with ‘Soul Time’ legend Vince Peach and long-term Rebelles friend Pierre Baroni (PBS’s Soul Groove ‘66) spinning the coolest 45s in town. The Rebelles are particularly honoured to be launching their own 45 over not one but two nights at Soul in the Basement. Get down to either of these shows to pick up the E.P. for the very special not-to-be-repeated price of $10!

And don’t forget to keep an eye out for The Rebelles’ sensational video for The Clapping Song! The video was produced by the combined creative genius of Melbourne comedy kings Lawrence Leung and Andrew McClelland – a must see!